Backing yourself is one thing, completely owning it is another and Luke Benneyworth ruled the roost once more this week. Another ton, another couple of catches and a mammoth 173 points helped all those who selected him (especially as captain and including himself) as “5 off them, 1 of them” leapfrogged “Duttlers Donkeys” and “Smoked It!” into top spot.

Interestingly, the biggest points accumulator of the week was a certain Mikey Dannenberg who, owing to a glitch in the Matrix, has been unable to access his initial team “Mystic Oz” so immediately entered another one, lovingly called it “S.Warne”, triple-captained Bones and plundered a gargantuan 779 points. This is the second time Mikey has triple-captained a star player (his last one being Sukesh when he scored 118 in week three). If you want the lottery numbers….

The usual suspects haunt the bottom few teams and there’s a theme developing. Tune in, turn on, or drop out. 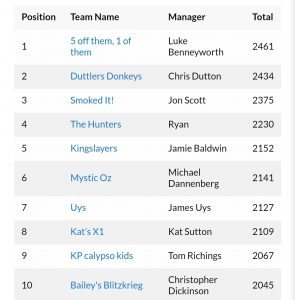