Keegan Petersen’s first ton for Stroud was the highlight for us in a heavy defeat in Wiltshire at Goatacre. In form batsmen, short boundaries, a good wicket, and an outfield like a carpet meant that the bowlers had it all to do, especially as there was nothing in the wicket or in the atmospherics to help them along. Nabi was the pick of the bowlers with 2-67 off 10 overs. All the other bowlers got some serious tap as Goatacre amassed  498 off 50 overs.

In reply maximum batting points were gained to keep us in the hunt for league survival with Keegan Petersen bagging his first ton for the club off 87 balls.

A tough day at the office but this won’t happen often and credit to all for sticking to the task and gaining 8 points.

The 2’s had a walkover as Lechlade were unable to fulfil their fixture so 22 points in the bag there.

The thirds travelled to second-placed Minchinhampton 2s, intent on closing the points gap. Skipper JC managed to call correctly, and had no hesitation in asking Minch to bat first on a tricky looking surface.

The promising early spell in tandem by seamers Ryan Boucher and Aaron Collins was unfortunately curtailed when Aaron had to leave the field unwell, with Rick Carman taking over and keeping things tight – bowling ten overs straight through, no mean feat at 71. Bouch soon got some success at the other end, removing both openers, before then also removing keeper JC with a legside delivery that he somehow managed to stop with a diving header… Tom Richings was fortunately on hand to take over the gloves.

Minch’s middle-order then built some decent partnerships, before Reuben Scott ripped one out with a beauty and Ollie Holmes then got to work, to telling effect.   Bowling their dangerous skipper on 40, Holmers then continued with the extremely effective tactic of bowling at the stumps, finishing with fine figures of five for 25 from seven overs.  At 151 for 9 from their 40 overs, Stroud were happy with their efforts come the tea interval.

The run chase didn’t get off to the best of starts, with openers Rich Tuttle and Tom Richings both falling very cheaply.  Geoff Vaughan and Ollie then built a decent partnership, before Geoff had to disappointingly depart bowled.  Joined by James Collins (battered but not bowed), another solid partnership was added before James had to go, and it was Tom King’s turn to keep Ollie company, albeit for not as long as he’d have liked.  With Bouch joining him and playing a fine disciplined supporting role, Ollie started to open his shoulders and the target became ever more comfortably within reach, with Ollie sailing past his half-century for good measure.  With plenty of time to get the remaining runs, the win was achieved in stress-free fashion.

As well as a fantastic man-of-the-match performance from Holmers, the afternoon was made all the more enjoyable due to the outstanding sportsmanship, spirit and sociability of the Minchinhampton side and their captain Pete Raphael.  We greatly look forward to the return fixture. 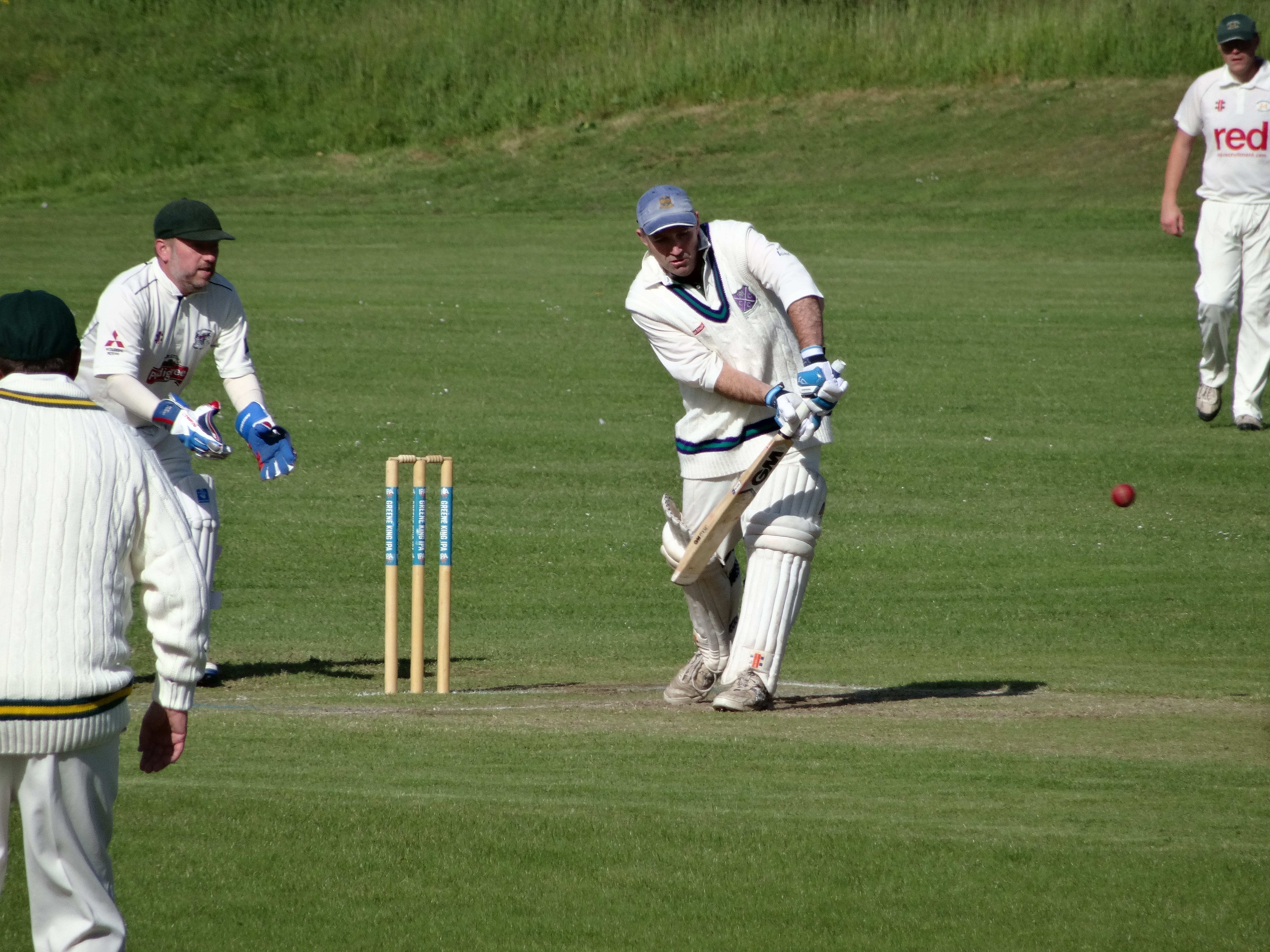 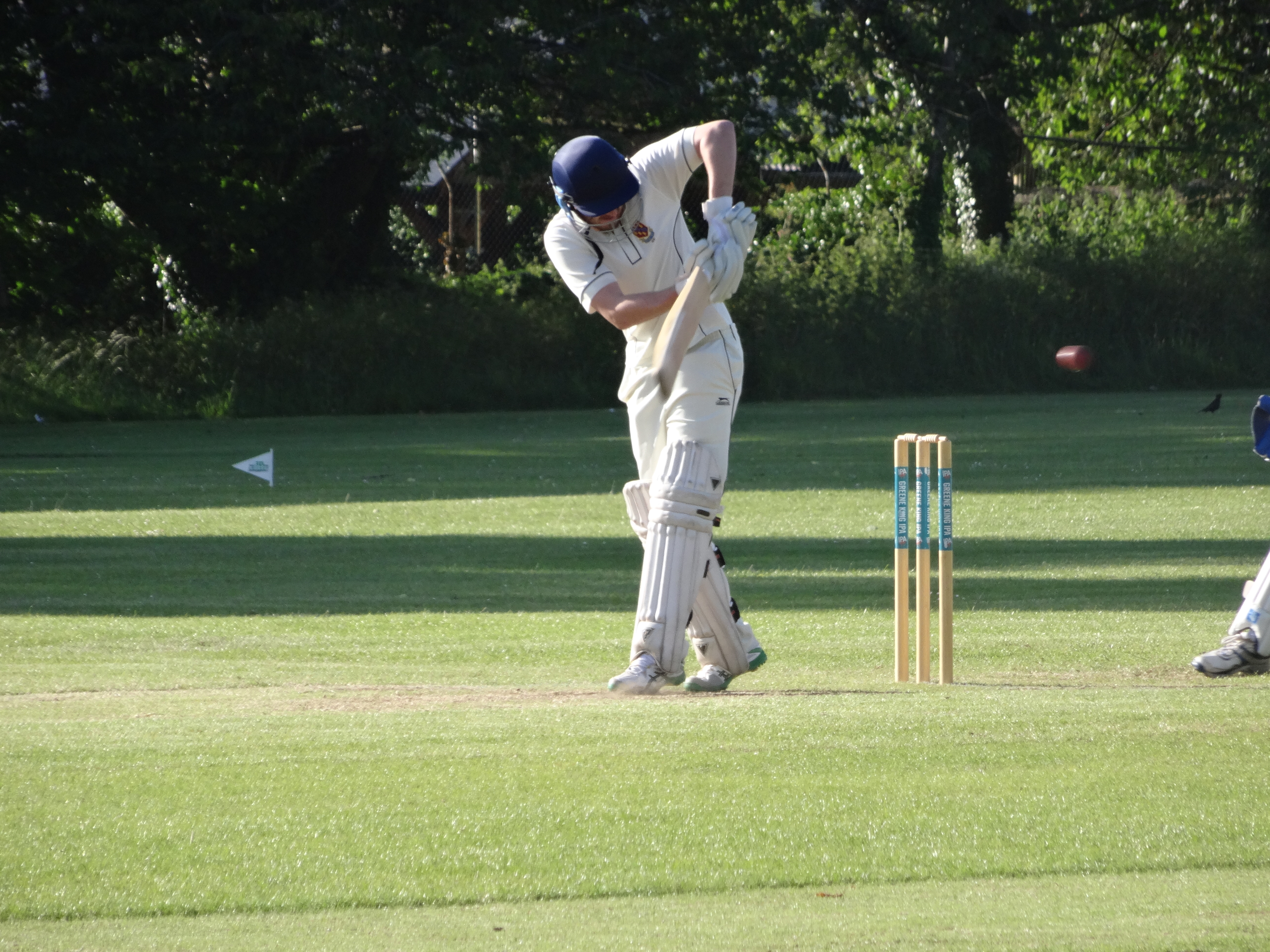 Despite the overnight rain and damp wickets at home, the 4th XI got a full match in against Rockhampton 4th XI. Valiant efforts of players in the evening and morning, sweeping water from the sheet that covered the second pitch at Stroud, were in vain as so much water was still sitting on the square that we would have only been able to bowl from the Stonehouse end.

After a pitch inspection the game was moved to the, now vacant, 1st pitch. Jon Scott lost the toss, Stroud were put into bat and made a very slow start, barely making 20 runs off the first 10 overs. After the openers were dismissed the pace picked up a little, but a couple of run outs continued to keep the rate below par.

Then a fabulous father-and-son partnership between Ed Loader (33) and Rob Loader (46 not out) pushed the score up past 100. After Ed Loader fell to a catch, Dan Collins came in and made a swift 15 before being bowled on the last ball and pushing the score up to a more respectable 162 for 6.

We were convinced we could defend this total but would have to set an attacking field and take wickets, and indeed wickets fell in the first two overs to Ollie Barlow (12-0-12-5) and Andy Sutton (7-2-15-3), with a great catch at short cover by Rob Loader. Rockhampton were struggling to score as the opening bowlers kept the ball lovely and straight and claimed another wicket apiece in their opening spells.

Russ Culver (5-0-18-1) then temped a few dangerous shots with his off-spin but chances went to empty ground our weren’t held. Eventually Russ got his wicket off an edge, deftly snatched out of the air by wicket keep Cal Rainey. At the other end Dan Collins (5-0-16-1) kept it tight and had one wicket LBW. After drinks, Jon Scott tossed the ball to Michael Dannenberg (6-0-24-2) who proved expensive in extras in his first over, but the captain persisted with him and he drifted a full toss onto the base of middle stump in his second.

Meanwhile young Ed Loader (3-0-13-0) made a bowling debut at the other end for a few overs before rain threatened and Andy Sutton was brought back on to put a few straight ones down to the tail enders. Mikey Dannenberg’s sharply turning leg-spin took the final wicket with Rockhampton 60 runs short of the target.